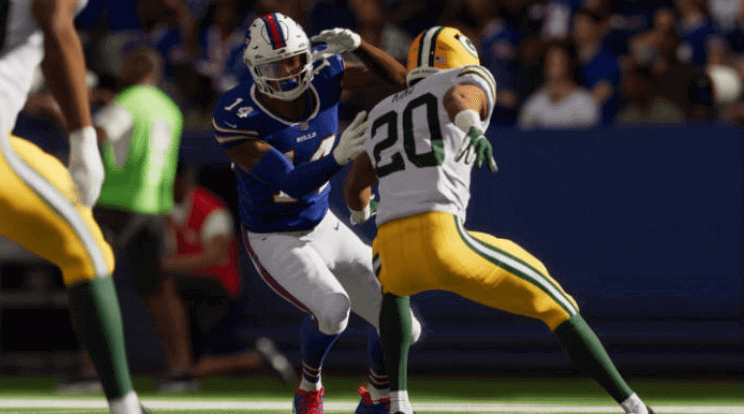 Back at EA Play Live, our team previewed the new scouting feature coming to Madden NFL 22 Franchise mode as part of our continued live service updates. Today, we wanted to give leagues, commissioners and all Franchise players more insight into the feature and its timeline.
In designing Madden NFL 22, we put our players at the center to help guide our development process. Through the Madden NFL Design Council, we reviewed over two million conversations and brought in community leaders earlier than ever to listen to what you most wanted to see in Franchise. This led us to deliver many top requested features including deeper staff management, more robust Weekly Strategy, a refreshed Season Engine, and other improvements at launch. While scouting was also highly requested, building these features first, laid the foundation for scouting.
With our commitment to Live Services across all modes of Madden NFL 22, we focused on providing a revamped scouting experience in our first Franchise update. It is important to our team that we deliver what you request at quality. We are taking the time to ensure scouting is polished with some additional testing and scouting will be available to all players as part of a Title Update coming in mid-October.

When scouting arrives, it will provide:

A full scouting department
In-depth scouting reports including player physicals, traits, and ratings
News content that will move players up or down the media big board, impacting draft stock
Mock drafts providing a snapshot of who teams are interested in throughout the season


As a reminder, to take advantage of the new scouting, you will need to restart your franchise. You have the choice to start or continue your franchise play with legacy scouting now, which you can keep after the Title Update, or restart to unlock the new feature in October.

First, let’s start with some of the big improvements and changes coming to scouting. Then, we’re going to take you through a season of scouting using the Detroit Lions as our Franchise team.

Your scouting experience will begin during Week 1 of the NFL regular season, where you’ll be introduced to the current draft class for the first time. Viewing the National Region of the Region Breakdown map surfaces the identity of the current draft class. Being able to see the overall positional strengths and weaknesses of the draft class, as well as on a per-region basis, allows you to plan your approach. You’ll be able to hire, fire, or re-assign your scouts to make sure their strengths align with the region they’re scouting.

For example, if one of the strengths of the Southeast region is cornerbacks, make sure you assign the scout that has the expertise in scouting cornerbacks to reap the most benefits. You’re in charge of optimizing your five scouts to help you find those draft gems.
DEV NOTE: We listened to feedback from multiple groups of players. Many players wanted to be able to “set it and forget it”. Now you can set your scouts and move forward without penalty if you choose not to interact.

The key dates to know from Week 1 of the Regular Season and beyond:

Each prospect has key percentage unlocks along the way:
1% - Baseline physical information for prospects
10% - Player Notes including traits, throw style, etc.
Every 10% - 1 attribute is revealed on the skill tab as a letter grade
70% - Player archetype is revealed
100% - All player attributes and true talent range are revealed


Scouting In Action - Detroit Lions
Let’s go on a journey from the start of the regular season to the NFL Draft using the Detroit Lions, as they currently have a pair of first-round picks thanks to the Los Angeles Rams. We’ll focus on the quarterbacks of this draft class and you’ll get to see how prospects will rise up the draft boards, fall down the draft boards, and surprise you through each season.

Even though our one scout is great at scouting safeties, there are multiple quality quarterbacks in the Southeast region. We tasked him to focus only on the quarterbacks to ensure we get as much info as we can on the class.

After an 0-2 start, we head into week 3 and the first mock draft of the year becomes available. With our first-round picks projected as top 5, we’re projected to grab a left tackle and cornerback early on.

Clearly, the draft pundits believe in Jared Goff despite the slow start. The first quarterback off the board was Ole Miss signal-caller Cade Atkins* going to the Philadelphia Eagles at pick #8. Atkins stands at 6’3” and 234 pounds with a big arm, a fast, violent motion, and has a high football IQ. Take note that the Steelers and Buccaneers are a top fit for him as he would be the successor to two extremely successful quarterbacks.

*All college athletes and names referenced here are fictional and not based on actual persons.

As the season progresses, USF quarterback Zach Nash has been becoming a household name. Nash, in his final collegiate season, is finally getting a chance to start and he is running with the opportunity. He has flown up boards and has positioned himself in many analysts' top 20 players thanks to his stellar dual-threat style.

DEV NOTE: We heard players wanted the draft board to be more dynamic, similar to real life, with good players rising and lower-tier players falling. Thus we leaned into our news stories to help better pay off those moments.

With the focus scouting done, Cade Atkins looks like an incredibly strong candidate to become the next Detroit Lions franchise quarterback. A top-tier arm, accuracy to all levels, and the ability to make plays under pressure.

By week 17, Cade Atkins has really separated himself from the rest. The other top quarterback prospect, Kevin Ruiz wasn’t as sharp as expected during the season. The Clemson product has very good accuracy, a good arm, but was not asked to lead the Clemson offense the same way Cade Atkins did and it showed through his awareness grade.

At the combine, both Atkins and Ruiz looked the part, but neither showed unbelievable athleticism with their 4.93 and 4.96 40 times. USC quarterback J.T. Gilchrist ran a 4.59 40 while impressing scouts with his ability to make throws off-platform. There is some injury risk around him, but he is someone to keep an eye out for with Ruiz slipping.

DEV NOTE: Being able to view pro day and combine times to compare and contrast was feedback we heard from players. We made sure to keep this aspect of scouting authentic where you will sometimes see better drill times for a player at pro days compared to the combine.

For private workouts, we decided to host CB Cherry, CB Jermaine Armstrong, and late first-round receiver Pat Wiley from LSU. With the first and sixth overall pick in the 1st round, we have the chance to truly double up on elite talents early. Wiley ran a 4.39 at the combine, and is well-known for his vertical threat and kick return skills. Armstrong is your prototypical long, fast CB with excellent ball skills. However, if Cherry, the best CB in the country, falls to us at #6 overall, it’d be difficult to not take him there.

We’ve arrived at the NFL Draft and with our first overall pick, we selected quarterback Cade Atkins from Ole Miss. Atkins' big arm, football IQ, and accuracy were all more than worthy of the first overall selection at 76 OVR.

Luckily, Bradley Cherry was still there, so we made him our selection and he turned out to be a very impressive prospect at 77 OVR.

Some of the players we took note of during the scouting process: Jermaine Armstrong, who was a 75 OVR, went to the Patriots at #11. Kevin Ruiz was drafted by the Vikings and came in at 69 OVR. Zach Nash fell to the second round as a 72 OVR. J.T. Gilchrist may be the steal of the draft, as he was taken by the Broncos at #20 but turned out to be a 75 OVR. His 83 injury may have been the deciding factor in his fall.

We hope you enjoyed following this walkthrough of just one example of what scouting will bring and the stories it can create in your Franchise. Don’t forget to come back for more Gridiron Notes where we showcase all the upgrades across all modes in Title Updates for Madden NFL 22.